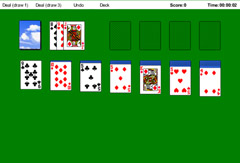 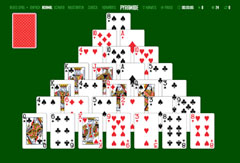 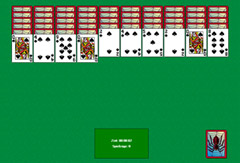 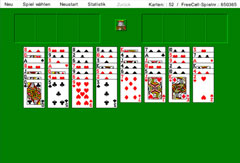 Solitaire is one of the most popular card games in the world, with the pre-installed Solitaire games on early Windows versions contributing to its popularity. Depending on how the cards are distributed, the gameplay can be either complicated or simple. However, some games are impossible to finish.

At the start of a game of Online Solitaire, seven rows are formed where only the top card is turned over. The remaining 24 cards form a pile of face-down cards, also known as the stock. This pile offers you individual cards when no more moves are possible in the vertical rows. Additionally, above the seven rows there are four empty fields – called stacks – on which the cards are to be stacked in the correct order.


Rules of the game – How do you win at online Solitaire?

The aim of Solitaire is to arrange the cards correctly on the four empty spaces, according to the suit of the card (hearts ♥, spades ♠, diamonds ♦ and clubs ♣). Each pile begins with an ace and is completed with the king. So, the correct order is as follows: Ace-2-3-4-5-6-7-8-9-10-Jack-Queen-King. When all four stacks are complete, Online Solitaire is won. If you cannot place any more cards, the game is over, but not won.

There are eight discard piles in the related game, Spider Solitaire. Here, you have to put the cards in the right order in the vertical rows. When a row is complete, the cards used to form the row must be removed from the board and placed on a stack as a completed pile. Freecell Solitaire, another related game, has four fields in addition to the four stack fields, for temporarily storing cards. However, Freecell does not have a stock pile.

In online Solitaire, you can place a card – either from the face down pile or a face-up card from a vertical row – on a face-up playing card in another vertical row. Note that this card has a different suit and a lower number. You can move several cards face-up from one row to another, provided the order is correct.

When you move cards from one row to another, the row from which you took the card(s) becomes free. This row now consists exclusively of cards face-down. In this case the top card is turned over.

If a row is empty, you can place a king, or a row beginning with a king, regardless of suit, on the empty row. To win online Solitaire, the four stacks must be filled according to card suit, and in the correct order. Each pile begins with one of the four ace cards and ends with the corresponding king.

How is the stock pile used in Solitaire?

If it is no longer possible to move cards in the vertical rows, you can use the pile of face-down cards. There are two variants of online Solitaire:

– Turn 1: one card is revealed

In the first variant, only one card (from the top of the pile) is revealed. If you don’t find a use for this, you can put it back at the bottom of the pile and turn over the next card from the top.

In the second variant (the standard), three cards are face up next to the pile, on top of each other. The card on top or the third card can be moved, whereas you cannot move the other two. If you are able to use the top card, it is possible to use the next revealed card, followed by the next.

If you cannot use the top card, you can reveal three additional cards. When you have turned up all the cards, you can simply start all over. However, it is important not to shuffle the cards again.

Before starting a game of online Solitaire, you first have to choose a difficulty level. There are three difficulty levels to choose from for both the “Turn 1” and “Turn 3” game modes: easy, normal and hard. After choosing your difficulty, the cards are dealt and you can win Solitaire according to the rules described above.

If you click on “Time limit on / off”, this activates the time limit for the online Solitaire game. In order to determine the time limit, a level of difficulty must be selected, which then leads you to a selection screen for the time limit, which you can specify as you like.

The online Solitaire game menu consists of various elements that provide players with simple and clear information about the current game, and enable quick setting selection. If you first select the difficulty “Normal” in the game mode “Turn 1”, then “Turn 1 · Normal” is highlighted in white in the game menu. If you click on it, a new game starts with that setting.

To switch to the “Turn 3” game mode, click on the field of the same name. Now, “Turn 1” will be muted, and “Turn 3 · Normal” is highlighted in white. Clicking on “Turn 1” again switches back to the game mode “Turn 1 · Normal”. To change the difficulty of an online Solitaire game, you can do this under “New game”. However, if you want to play the current game again, click on “Restart”.

To undo steps or to put cards back on the stock pile, click on “Undo”. To restore undone steps, click on “Redo”. If you don’t know what to do next, you can get help by clicking on “Hint”, which will display a possible move. You can pause the game by clicking on “Pause”, to be continued later. To get to the start menu, simply click on the “Solitaire” in the middle. On the game display, you can see the elapsed time, the number of steps, the remaining cards in the stock pile and the number of passes through the stock pile.

📌 Can I really play Solitaire on this site for free?

You can not only play Solitaire, but also Spider Solitaire and Freecell for free. You don’t have to register, or otherwise reveal any information about yourself in any way. Just visit our site and choose which game you want to play. Have fun!


📌 Which Solitaire variations can I play on your site?

We offer Solitaire, Spider Solitaire and Freecell for free play. Among the different solitaires you can choose from four games based on a specific theme. So you can find games with a Windows XP theme or games that need to be completed within a certain time. Just browse our site a little, you’ll surely find a game you like!


📌 What do I have to do to win at Solitaire?

The objective of the popular card game is to place all cards in four discard piles in an orderly fashion. For each suit – spades, hearts, diamonds & clubs – one discard pile is formed. A discard pile always starts with the ace of the respective suit. The order of each discard pile is as follows: Ace, two, three, four, five, six, seven, eight, nine, ten, jack, queen, king. To assign cards to the discard pile, the seven rows of cards on the board must be arranged in such a way that cards are available for discarding.
Cards of the card rows can only be arranged in descending order and in changing colour. For example, if a Five of Clubs is face up, you can only place a Four of Hearts or a Four of Diamonds on it. You could also place on the face up Five of Clubs a card sequence that begins with a Four of Hearts or Four of Diamonds. If a card row becomes free, you can start a new row in its place, but this only works with a king.


📌 In which order do I have to stack the cards?

To complete the game successfully, you must make a pile of cards from each of the seven card rows for the suits Hearts, Spades, Diamonds and Clubs. The piles start with an ace and end with the king. Therefore the order is ascending: Ace – Two – Three – Four – Five – Six – Seven – Eight – Nine – Ten – Jack – Queen – King.
To get the cards you want to put on the discard pile, you have to sort the card rows accordingly. The order of the cards on the playing field (also known as tableau) is descending. You can only place smaller values on top of the larger ones. You must also note that the colours must alternate. For example, if you have an open heart or Seven of Diamonds, you can only place a six of clubs or six of spades on it. You can also place a row on the seven of hearts or diamonds that begins with a six of clubs or spades. If you can no longer sort the cards on the board, you can reveal cards from the Talon (face down deck). Sometimes it happens that you uncover aces that you can discard immediately.


📌 What can I do if I get stuck at Solitaire?

Depending on the browser game, you have different options if you get stuck. For example, you can display the next move in the game. If there is no next move, you have to take a card from the deck to continue playing. You may even have to undo your moves. If all of the above options do not work for you, the game is blocked and you will have to start a new game.