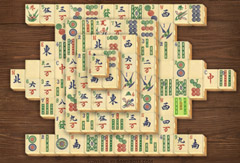 Hearts is an exciting game for four people in which you have to be extremely careful not to play the wrong cards and score an unnecessary number of points – unless you plan to shoot the moon … Hearts originated in the USA and is mostly played on the computer.

Hearts is played with a standard French 52-card deck. In the online version, you are competing against three virtual players who you have to outwit. With Hearts, it is important to keep your own score as low as possible. Your score will be debited by all heart cards that come to your hand at the end of a round. The Queen of Spades is particularly bad luck.

At the start of each round of Hearts, you and your fellow players each receive 13 cards. Each player only sees their own cards. You choose the three cards that are the most problematic, pass them on to a specified other player and receive three cards in exchange. You only receive the new cards once you have handed over your own three cards. Since there is only one exchange in each round, you know where your discarded cards are located. This can – and should – affect your exchange decisions. Find out more about this down below in our strategic tips section for Hearts.

The game is not particularly complicated, yet it is based on various principles and rules, which may seem a bit strange at first. Hearts is a point-based game in which there is no trump suit or trump cards. Rather, a chosen suit must be played. The highest card that falls wins the trick. The ranking of the cards begins with two as the lowest value, followed by three to ten as well as jack, queen, king and ace. In principle, it doesn’t matter how many points you earn with Hearts, as long as you don’t hold a queen of hearts or spades. What these cards mean for the points calculation is explained in the section on point scoring.

The player holding the two of clubs begins the round. Going clockwise, the other players now have to play their clubs. If you don’t have a club card, you must discard any card. In the first hand, however, this may not be a heart card or the queen of spade (aside from the rare case that you only have hearts, and possibly also the Black Queen, in hand). The player who takes the trick leads the next hand. An important detail: Breaking Hearts – “Breaking Hearts” is a rule which dictates that a hand can only begin with a heart card after a heart has already been discarded. In other words, if a player could not use the suit played, and took the opportunity to discard a heart card, then the first move of this kind “breaks the heart”.

For every heart card that you hold, your score increases by one point. The Queen of Spades, also known as the “Black Queen”, earns 13 points, which is why she is sometimes referred to as the “Black Pig”. However, if the end of a round reveals that you hold all 13 hearts and also the queen of spades, you will not receive a single point. Instead, your opponents’ scores will increase by 26 points each. This very rare outcome is called “Shooting the Moon”. Once the first player has reached 100 points, the game of Hearts is over. The winner is the player with the lowest score.

At first, simply enter your screen name and your desired difficulty level. Then the game begins right away. Once the cards are dealt, your hand is face-up in front of you. You can only see the backs of the other players’ cards. Every player – including you – is displayed with their name and current score. You can select your three exchange cards by clicking on them and then confirming. You must also confirm receipt of the new cards with “Okay”. The game begins when the two of clubs are played. With one click, choose the card you want to play. You cannot make moves that do not comply with the rules.

You can see the menu bar above the virtual card table. Hearts requires only a few settings: with a click on EASY, NORMAL or HARD, you can break off the current game and start a new one at the desired level. To the right of the HEARTS lettering you will find the PAUSE function, and next to it the round counter. On the far right, the duration of the current game is displayed.

Hearts is not as complex as Skat or Bridge, for example. Nevertheless, there are three opponents at the table who usually also want to get rid of their hearts cards, and especially the queen of spades. In a game of Hearts, clever tactics begin with the card swap, which gives you the best opportunity to optimise your hand. In the early stages of a round of Hearts, the most important thing is to get rid of cards that could be problematic. After the swap, you can only do that by playing them. Ideally, after this round you should no longer have any problematic cards in hand. Here are some tips and suggestions for your exchange options.

Tip 1: Avoid the Queen of Spades

The game may be called “Hearts”, but the suit that actually decides the game is spades, because the Black Queen gives you as many points as all the hearts combined. Thus, your most important goal is to avoid the queen of spades – either by giving it up or playing strategically and placing it in someone else’s hand.

Tip 2: Never start with an ace

It would be fatal if another player could not play a card, and instead took the chance to cobble you with the queen of spades or a high-value heart.

If the first heart is “broken”, you can usually play a low heart card without worrying. It is very likely that another player will have to take on the points.

Tip 4: Free yourself from a suit

The advantage is obvious: if you cannot play a suit, you have the option of getting rid of one or more cards that could be dangerous to you.

Tip 5: Watch out for cards still to come